To share your memory on the wall of Jacquelyn Winfrey, sign in using one of the following options:

Print
Jacquelyn June (Jackie) Winfrey of Quincy passed away on November 5, 2020. She was born to Jacob and Lena Grening on December 1, 1932 at the family farm in Odessa, WA.

After graduating from Odessa High School in 1951 Jackie attended a de... Read More
Jacquelyn June (Jackie) Winfrey of Quincy passed away on November 5, 2020. She was born to Jacob and Lena Grening on December 1, 1932 at the family farm in Odessa, WA.

After graduating from Odessa High School in 1951 Jackie attended a dental aide school in Spokane. While there she met Jim at a USO dance hall. Jim says, “She was the best looking one there.” They married in 1953 at the Christ Lutheran Church in Odessa.

Jackie was well known in Odessa for her cake decorating. She spent many years as a Cub Scout den leader. Her sons lovingly referred to her as “Yackie Jackie.”

Jackie and Jim moved to the Quincy area in 1982. She was very well known there for her beautiful flowers.

Jackie was preceded in death by her parents, her brother (Art), her sister (Clara), her son (Russ), and her granddaughter (Bobbie Jo).
Jackie is survived by her husband of 67 years, Jim, sons Kirk, Mark (Colleen), Jay (Carol), Dale (Tamara), 13 grandchildren, 23 great grandchildren, and one great great grandchild.

Due to COVID, services will be held in Odessa in the spring of 2021.
Please leave a memory for the family or sign their online guestbook at www.scharbachs.com.
Scharbach’s Columbia Funeral Chapel, Quincy, is assisting the family with arrangements.
Read Less

Receive notifications about information and event scheduling for Jacquelyn

Print
Services will be held in Odessa in the Spring, 2021

We encourage you to share your most beloved memories of Jacquelyn here, so that the family and other loved ones can always see it. You can upload cherished photographs, or share your favorite stories, and can even comment on those shared by others.

Posted Nov 12, 2020 at 07:08pm
My dear Grandma Jackie! I love you so much and to say you will be missed is such an understatement! Forever and always you will live in my heart! 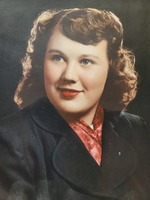