To share your memory on the wall of Margaret Bruce, sign in using one of the following options:

Print
Margaret Maxine Bruce, of Ephrata, WA., peacefully went to be with her Lord and Savior on November 19, 2020. She was 101.

Due to COVID restrictions, a virtual memorial service will be held on December 5th at Community Church of Ephrata... Read More
Margaret Maxine Bruce, of Ephrata, WA., peacefully went to be with her Lord and Savior on November 19, 2020. She was 101.

Due to COVID restrictions, a virtual memorial service will be held on December 5th at Community Church of Ephrata.

Margaret was born November 6, 1919, in Fort Scott, KS, the daughter of Frank and Lena Benedict. Margaret was the youngest of five children. Growing up on a farm, Margaret helped with various chores such as gathering eggs. Despite living in the country, Margaret found ways to pursue her passion for music at a young age by riding a horse bareback to a neighbor’s home to take piano lessons. She attended Fort Scott High School and enjoyed both band and orchestra; played tennis and was a class officer both her junior and senior year. She attended one year at Fort Scott Junior College before accepting a position at Western Insurance. It was there that she met the love of her life, Kenneth Bruce, whom she married on Feb. 1, 1942, in Hammond, KS. She and Kenneth owned and operated the local grocery store in Hammond for over 10 years before moving out west to seek new opportunities in Quincy, WA in 1957. Once there, Margaret quickly became involved in the local Quincy church as a Sunday School and Vacation Bible School teacher. She worked as a bank teller at National Bank of Commerce in Quincy. She and Kenneth moved to Redmond, OR in 1967 where she continued her career as a bank teller and eventually became the executive secretary to the Branch Manager at Western Bank. She retired in 1981. She and Kenneth moved to Crooked River Ranch, OR in 1980 to enjoy their retirement years. There they played countless rounds of golf, enjoyed the scenery, wildlife, square dancing and spending time with family and friends. During her lifetime she was a member of Community Presbyterian Church, Women’s Circle, Juniper Golf Club, Eastern Star, Olla Podrida in Redmond and Crooked River Ranch Golf Club. Margaret was an accomplished musician and spent many years as the church organist/pianist. Kenneth and Margaret moved to Ephrata, Washington, in 2004 to be closer to family.

After Kenneth’s passing in 2008, Margaret continued to live independently and enjoyed quilting, faithfully following the Seattle Mariners, playing pinochle with friends, staying in shape by riding her exercise bike and traveling to visit family in Oregon, Kansas, and South Dakota. Margaret continued to travel to several family reunions well into her nineties, located in Lincoln City, OR, Boston, MA, Branson, MO, Kellogg, ID and celebrated her 95th birthday with a family trip to Palm Springs. Margaret moved into Garden Oasis Assisted Living in 2016, then in September 2019 to the west wing of Columbia Basin Hospital. She was well cared for and loved by the medical staff and caregivers. The family so appreciates the devotion and attention given to her there. Over the years she developed many friendships through the Community Church of Ephrata--her warm and caring personality was loved by all. She celebrated her 100th birthday last November with over 40 friends and family, with some attendees traveling from South Dakota, Oregon, Kansas, Oklahoma, Arkansas, Ohio and Missouri to celebrate the very special occasion.
Margaret’s legacy of faithfulness, integrity, determination, kindness, sense of humor and positivity in all situations will be a guiding light for generations to come.

Scharbach’s Columbia Funeral Chapel in Quincy, WA is assisting the family with arrangements. Please leave a memory for the family or sign their online guestbook at www.scharbachs.com.
Read Less

Receive notifications about information and event scheduling for Margaret

Print
Due to Covid restrictions, a virtual memorial service will be held on December 5, 2020 at the Community Church of Ephrata

We encourage you to share your most beloved memories of Margaret here, so that the family and other loved ones can always see it. You can upload cherished photographs, or share your favorite stories, and can even comment on those shared by others.

Sorry to hear of your loss of your mother. Our thoughts and prayers are with the family at this time. She lived a wonderful & full life. 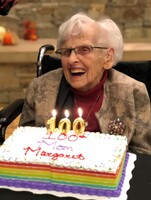